Gold is the most malleable and ductile of all metals; a single gram can be beaten into a sheet of 1 square meter, or an ounce into 300 square feet. Gold leaf can be beaten thin enough to become transparent. The transmitted light appears greenish blue, because gold strongly reflects yellow and red.

Gold has been widely used throughout the world as a vehicle for monetary exchange, either by issuance and recognition of gold coins or other bare metal quantities, or through gold-convertible paper instruments by establishing gold standards in which the total value of issued money is represented in a store of gold reserves.

However, production has not grown in relation to the world's economies. Today, gold mining output is declining. With the sharp growth of economies in the 20th century, and increasing foreign exchange, the world's gold reserves and their trading market have become a small fraction of all markets and fixed exchange rates of currencies to gold were no longer sustained.

At the beginning of World War I the warring nations moved to a fractional gold standard, inflating their currencies to finance the war effort. After World War II gold was replaced by a system of convertible currency following the Bretton Woods system. Gold standards and the direct convertibility of currencies to gold have been abandoned by world governments, being replaced by fiat currency in their stead. Switzerland was the last country to tie its currency to gold; it backed 40% of its value until the Swiss joined the International Monetary Fund in 1999.

Pure gold is too soft for day-to-day monetary use and is typically hardened by alloying with copper, silver or other base metals. The gold content of alloys is measured in carats (k). Pure gold is designated as 24k.

Many holders of gold store it in form of bullion coins or bars as a hedge against inflation or other economic disruptions.

Modern bullion coins for investment or collector purposes do not require good mechanical wear properties; they are typically fine gold at 24k, although the American Gold Eagle, the British gold sovereign, and the South African Krugerrand continue to be minted in 22k metal in historical tradition. The special issue Canadian Gold Maple Leaf coin contains the highest purity gold of any bullion coin, at 99.999% or 0.99999, while the popular issue Canadian Gold Maple Leaf coin has a purity of 99.99%.

Several other 99.99% pure gold coins are available. In 2006, the United States Mint began production of the American Buffalo gold bullion coin with a purity of 99.99%. The Australian Gold Kangaroos were first coined in 1986 as the Australian Gold Nugget but changed the reverse design in 1989. Other popular modern coins include the Austrian Vienna Philharmonic bullion coin and the Chinese Gold Panda.

Gold extraction is most economical in large, easily mined deposits. Ore grades as little as 0.5 mg/kg (0.5 parts per million, ppm) can be economical. Because ore grades of 30 mg/kg (30 ppm) are usually needed before gold is visible to the naked eye, in most gold mines the gold is invisible. 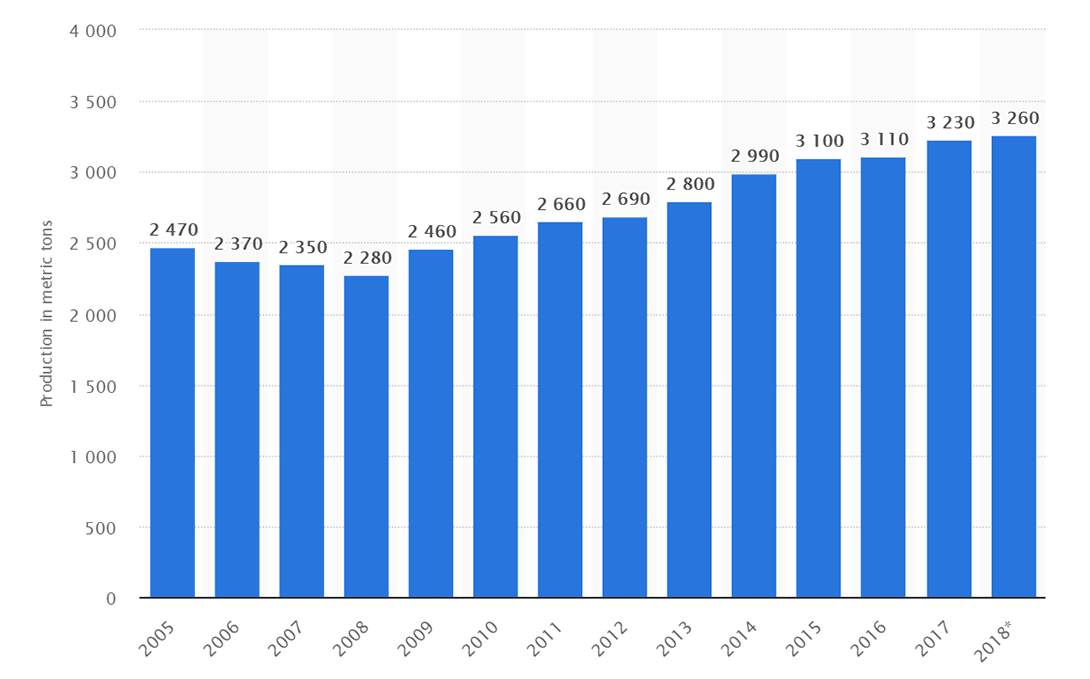 China, Australia, Russia, and the United States are some of the largest producers of gold in the world. Global production of gold reached approximately 3,150 metric tons in 2017. Production in China has increased from 320 metric tons in 2009 to an estimated 440 metric tons in 2017. However, large-scale gold production is minimal with only one mine exceeding 300,000 ounces of gold, the Zijinshan gold-copper mine in the Fujan Province. The production value of gold in the United States has increased from 4.9 billion U.S. dollars in 2006 to eight billion U.S. dollars in 2015. One of the largest gold companies in the world, AngloGold Ashanti, is headquartered in Johannesburg, South Africa and was founded in 2004. It generated revenues of 4.3 billion U.S. dollars in 2016. It produced over 3.6 million ounces of gold in 2016, with over half of it being produced in Africa.